TECHNOLOGY was behind VICT’s winning entry following significant investment by the terminal owner to produce the most efficient landside operation possible and increase the Port of Melbourne’s container freight capacity by one million TEUs per annum.

By using on demand’slot bookings, VICT aims to achieve less wastage of time slots and greater availability of slots for all transport carriers to plan their workloads.

A VICT spokesperson told Daily Cargo News, “We have invested heavily in leading edge equipment which changes the face of stevedoring”.

“With these advancements, we are able to raise health and safety standards to an unprecedented level as well as introducing major efficiencies to the Australian supply chain.”

The result of this investment has meant that transport companies using VICT avoid the usual congestion encountered at Melbourne’s international container terminals (all manually operated) and their fleet can achieve fast truck turnaround times.

“More emphasis will be placed on box turn time next year as we attempt to work with transport operators to increase box utilisation per truck to further enhance our productivity rates and increase efficiencies.”

This means transport companies can utilise their fleets at highly efficient levels, reducing truck movements on congested urban roads and making multiple container exchanges, both in and out of the terminal, on one vehicle.

“Consistent levels of service for our customers is a huge difference which comes from the benefits of automation,” said the spokesperson.

VICT’s automated cranes provide unprecedented levels of information that customers can use to their advantage.

“With our load-sensing cell technology, we recently alerted one shipping line of a consignment of poorly packed export containers with an uneven weight distribution across the floor.

“That weight distribution exceeded the safe working load of the container. The shipping line instantly contacted the shipper who then changed their method of loading to ensure compliance with the shipping line’s standards,” said the VICT spokesperson.

Automation also significantly reduces the likelihood of losing containers, with VICT reporting to date that it has not lost a single container.

“Anyone who has witnessed our operation first hand will see that the likelihood of damage to cargo is almost nonexistent. Conainers are lifted through automation with such accuracy that damage to a container is virtually impossible,” said the spokesperson.

Given that automation is still in relative infancy at container terminals globally, such systems usually come with challenges.

VICT says its landside operation has performed “exceptionally well” since opening a year ago, but that its shipside operations required more attention after going live.

“We have seen a consistent improvement week on week with our productivity rates for shipside operations.

“With a recent system upgrade to fix a multitude of bugs including pairing of twin containers for loading, we have seen a dramatic increase in productivity rates,” the spokesperson said.

VICT is still testing its automatic lashing platforms, a world first technology that will remove one of the world’s most dangerous jobs (removing and replacing twistlocks from suspended loads) from the quayside.

The project has also received a ‘Leading’ from the Infrastructure Sustainability Council of Australia for its build as well as its design.

The key areas where credits were achieved were in discharges of water, noise, air quality, vibration and light pollution. VICT also scored highly in diverting waste from landfill, community engagement and notably in innovation through its inclusion of automatic lashing platforms. “We are extremely proud of these achievements in the area of sustainability,” said the spokesperson.

With VICT now fully developed and in operation, the Port of Melbourne now has a capacity of an additional one million TEU.

“We are well on track to making good use of this capacity as Victoria’s import and export trade continues to grow at a healthy rate,” says VICT. 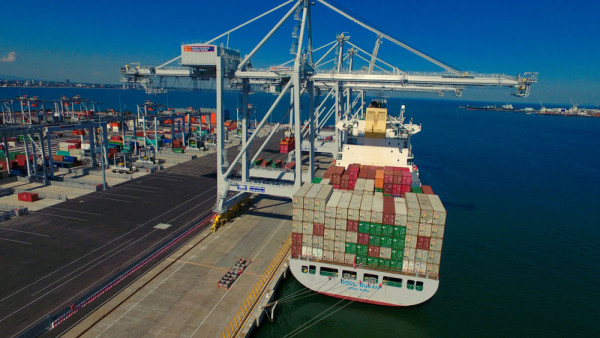