Victoria International Container Terminal (VICT) has been announced as a winner of the ‘Application of Technology Award’ at the annual Victorian Transport Association (VTA) AFIAs, which took place at Crown’s Palladium Ballroom in Melbourne on Saturday 2nd September 2017.

VICT was also a finalist in the ‘Young Achiever of the Year Award’ category, nominating team member Stuart Finch from the automated container terminal’s Engineering Department.

VICT is Australia’s first fully automated international container terminal located at its busiest port, the Port of Melbourne. Since opening its doors for business in April this year, VICT has brought record-breaking efficiencies to members of Melbourne’s transport carrier community as a result of its large investment in automated infrastructure. Turnaround times for trucks visiting the terminal are the fastest achieved anywhere in Australia, with average container truck servicing times only taking 17 to 24 minutes.

Amongst those presenting the award were Victorian Treasurer, The Honourable Tim Pallas, VTA CEO Peter Anderson and VTA President Cameron Dunn, as well as Chris Koniditsiotis, CEO of the Australian government body Transport Certification Australia (TCA) who were sponsors of the prestigious award.

VICT’s Operations Landside Manager, Leon Peetoom, accepted the award thanking the VTA for both their recognition and continued support. Personally addressing the industry, he said “It is important to VICT to be a part of the VTA so that we are visible to you, our customers, and that you can see we are committed to working with you in what can be a challenging industry.”

Mr Peetoom added that “Since opening our doors in April this year, the level of automation across VICT’s landside operation has seen real efficiencies for the transport community and we are committed to continuous improvement in that space.” He concluded by describing VICT’s “very passionate team who love what they do and have invested a lot of time and effort to get our automated terminal up and running. We are all very proud of our achievement and look forward to welcoming more of you through our gates in the future.”

Victorian Transport Association CEO Peter Anderson remarked that “The technology being deployed throughout the new VICT Webb Dock terminal is very impressive and it’s terrific their achievements have been deservingly recognised with an AFIA. VICT is critical for the Port of Melbourne to remain Australia’s largest port and the VTA looks forward to working with VICT as it continues to grow.” 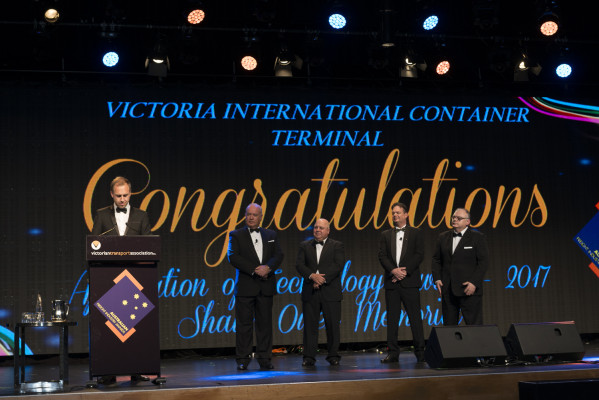